[Complete this form to request a reservation] 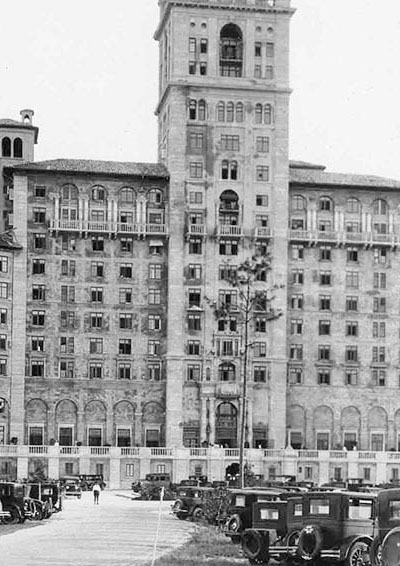 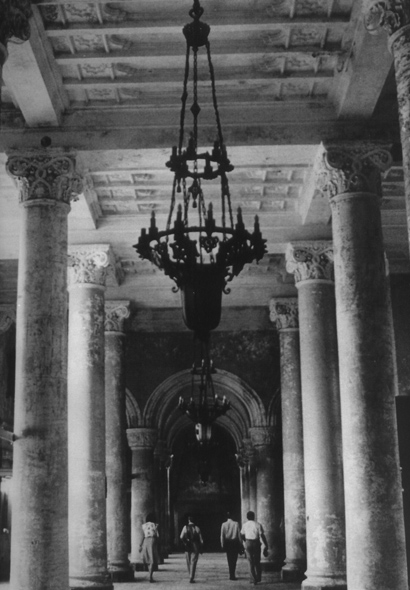 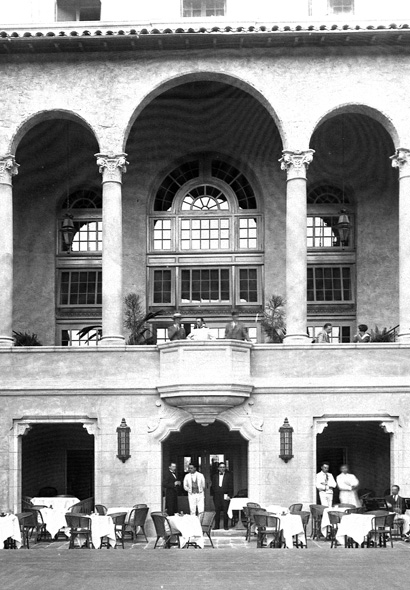 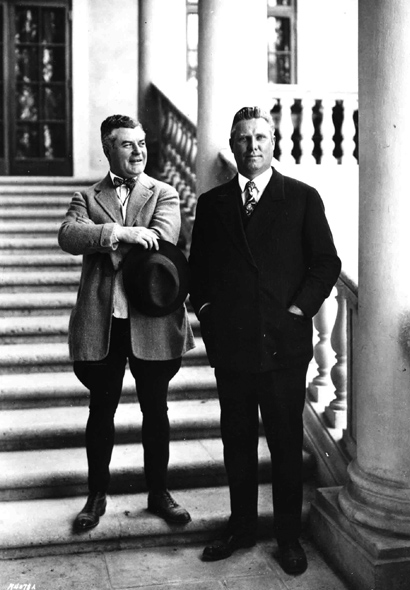 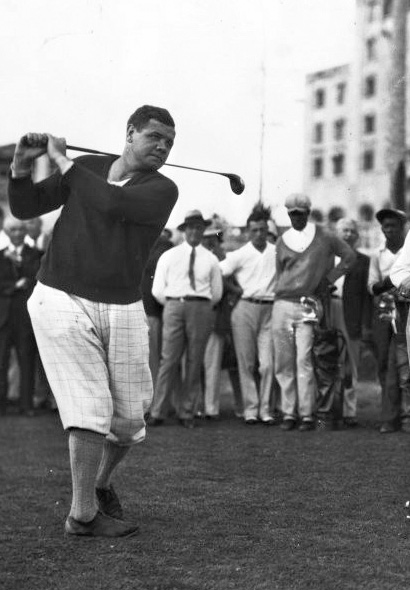 Picture a dreamlike setting complete with exquisite, hand painted frescos on barrel vaulted ceilings, brilliant travertine floors, fine marble columns, intricate leaded glass fixtures, carved mahogany furnishings and lavish gardens. Then picture this all in the shadow of a spiraling Moorish Giralda tower. Is it a Spanish castle or a grand Venetian palazzo?

Although The Biltmore in Coral Gables, Florida does resemble the finest in classic Mediterranean architecture, it is neither an Italian palazzo nor Iberian castle. Instead it is the centerpiece of George Merrick’s vision of Coral Gables as an elegant, stately suburb, which he called “The City Beautiful.” Combining his deep affection for lush South Florida landscape with a high regard for Italian, Moorish and Spanish architectural influences, Merrick realized his dream in the construction of his masterpiece. This is The Biltmore Hotel.

As the creator of Coral Gables, land developer George E. Merrick founded the University of Miami, and developed the suburbs with strict building codes to ensure the beautiful surrounding. In 1924, young Merrick joined forces with Biltmore hotel magnate John McEntee Bowman at the height of the Florida land boom to build “a great hotel…which would not only serve as a hostelry to crowds which were thronging to Coral Gables but also would serves as a center of sports and fashion.”

On November 25, 1924, 200 of Miami’s business and civic leaders, as well as the press gathered for a dinner to celebrate the new partnership. Bowman announced that the $10 million project would include a 400- room hotel, a country club, a service building, a championship golf course, polo fields, tennis courts and an enormous 150 by 225 foot swimming pool. The 18-hole golf course, designed by premier golf course architect Donald Ross was first to open debuting in January 1925.

Finally, on January 15, 1926, the Miami Biltmore Country Club debuted with a magnificent gala opening that promised to be the social event of the year. The leading socialites of the Northeast came down on trains marked “Miami Biltmore Specials.” As champagne flowed and guests fox‐trotted to the strains of three orchestras, one led by famed bandleader Paul Whiteman, the Biltmore’s Giralda Tower was lit for the first time and could be seen from miles around. An overflow crowd of 1,500 guests attended the opening dinner‐dance, and a landmark era in South Florida history began.

The Biltmore was one of the most fashionable resorts in the entire country in its heyday, hosting royalty of both the European and Hollywood variety. The Duke and Duchess of Windsor, Ginger Rogers, Judy Garland and Bing Crosby were frequent guests. In fact, everyone who was anyone, from politicians like President Franklin D. Roosevelt to notorious gangsters like Al Capone– stayed at The Biltmore, where they enjoyed fashion shows, gala balls, aquatic shows in the 23,000 square foot grand pool, elaborate weddings and world‐class golf tournaments. With the Jazz Age at full cry, The Biltmore’s big bands entertained wealthy, well‐traveled visitors to this American Riviera resort.

Challenged by America’s economic lulls in the late 1920’s and early 1930’s, The Biltmore thrived by hosting aquatic galas that drew crowds and kept the hotel in the spotlight. Up to 3,000 spectators turned out on Sundays to watch synchronized swimmers, bathing beauties, alligator wrestlers and the four year old boy wonder, Jackie Ott, whose act included diving into the immense pool from an 85‐foot high platform. Prior to his tree‐swinging days in Hollywood, Johnny Weissmuller was a Biltmore swimming instructor and later broke world records at The Biltmore pool. The aquatic shows were extremely popular with families, who would later dress up to attend fashionable tea dances on The Biltmore’s grand terrace.

With the onset of World War II, the War Department converted The Biltmore to a huge hospital, dubbed the Army Air Forces Regional Hospital. Adapting the building to its new use, the Army sealed many of the former hotel’s windows with concrete, and covered the travertine floors with layers of government-issue linoleum. Also the early site of The University of Miami’s School of Medicine, The Biltmore remained a Veteran’s Administration hospital until 1968.

Following intense lobbying by Coral Gables officials and city residents for The Biltmore’s acquisition, in 1973 the City of Coral Gables was granted ownership of the hotel through the Historic Monuments Act and Legacy of Parks program. But the City remained undecided as to the structure’s future, and The Biltmore remained unoccupied for almost 10 years.

Finally in 1983, the City initiated a full restoration of the Biltmore to its former glory as a grand hotel. Nearly four years and $55 million later, The Biltmore re-opened on December 31, 1987 as a four-star hotel and resort. More than 600 guests turned out to honor the historic Biltmore at a black-tie affair. The hotel remained open for three years, but closed again in 1990 in the midst of the country’s economic downturn.

In June of 1992, a multi-national consortium led by Seaway Hotels Corporation, a Florida hotel management firm, became The Biltmore’s operators. Seaway, managed by Gene Prescott, is a hospitality organization that owns and manages quality hotels in Florida. In addition to The Biltmore Hotel, the company’s portfolio includes The Sheraton Sand Key in Clearwater Beach, Florida.

Seaway embarked upon a $40 million, 10-year renovation program restoring The Biltmore to its world-class excellence. The company invested in complete guest-room renovations and also built a state of the art fitness center and spa. In addition, The Biltmore spent approximately $3 million to restore the historic 18-hole championship golf course in 2008. The Biltmore’s landmark swimming pool, one of the largest hotel pools in the continental United States, also underwent considerable refurbishment, led by noted landscape architect Emilio Fuster. The 85-foot high diving tower was transformed into a lush tropical waterfall, and private cabanas were built alongside the pool. The 600,000-gallon, 23,000 square-foot pool was emptied and completely resurfaced with polished marble.

At the 1926 gala opening of the Miami Biltmore Country Club, Dr. Frank Crane predicted, “Many people will come and go, but this structure will remain a thing of lasting beauty.” Dr. Crane’s prediction came true on June 19, 1996, when the National Register of Historic Places designated The Biltmore a National Historic Landmark, an elite title offered to only 3 percent of all historic structures.

In keeping with traditional European grand hotels, Old World charm permeates the property. Consistent with the architectural style of the affluent homes of Coral Gables, The Biltmore’s design is considered “Mediterranean Revival,” based predominantly on Spanish style with Moorish and Italian accents. The Biltmore’s centerpiece is its 93 foot copper clad tower, modeled after the Giralda Tower in Seville, Spain. Guests arrive at The Biltmore via an arched driveway that leads to an impressive façade. Throughout the property, guests will encounter grand architectural ornaments, from the colonnaded lobby with hand-painted ceiling beams, to the open air courtyard and fountain, plus balconies with balustrades and gleaming terrazzo and tile floors.

Today, the 273 room hotel and resort is known as The Biltmore and is indeed as elegant as the day it opened. The Biltmore’s rich history makes it Coral Gables’ most preeminent historic landmark. Coral Gables is a largely residential, affluent area graced with broad, planted boulevards, golf courses, and a country clubs. Stately Mediterranean homes, Banyan trees, and tropical foliage line its quiet streets. 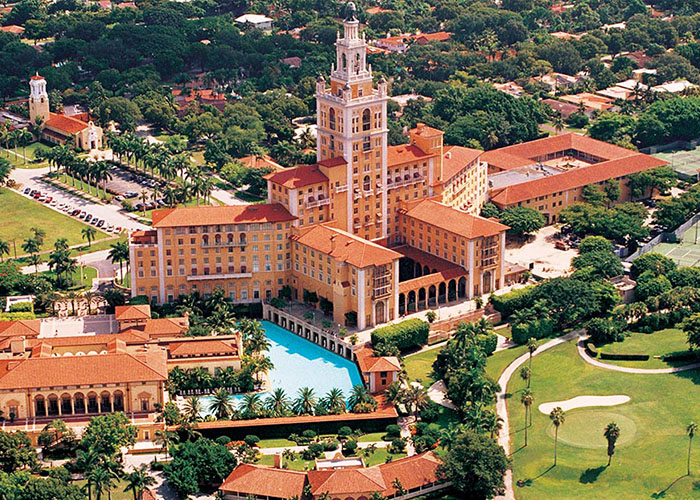 Stay At The Luxurious Biltmore Hotel

Graced with effortless beauty and sophistication, The Biltmore Hotel is a National Historic Landmark located in the exclusive Coral Gables area,