The Iconic Biltmore Hotel Miami Completes Its $35-million Transformation
Renovations to its 271-guestrooms, Donald Ross golf course, Fitness Center, as well as meetings and event space ushers in a new era of hospitality at the famed resort

CORAL GABLES, Fla. (January, 2020) – The Biltmore Hotel, a national historic landmark established in 1926, member of the Leading Hotels of the World and iconic luxury hotel in the heart of the exclusive area of Coral Gables, announces the completion of its $35-million restoration and redesign of all the hotel’s luxurious accommodations as well as 18-hole, par-71 golf course. The famed resort, also completed enhancements to its, spa, Fitness Center, as well as its 75,000 sq. ft. of conference, meetings, and banquets space.

Drawing inspiration from the property’s iconic architecture, D’Shakil Designs and Studio 5 Design + Architecture, led the hotel’s new fresh design, which follows the original vision set by George Merrick, the influential developer behind the birth of Coral Gables that envisioned the hotel’s history, glamour and regal elegance. It was in 2017, that the Biltmore Hotel Miami embarked on its first phase of the $35-million property-wide transformational journey.

“The ultimate goal was to ensure the revival of the resort’s original glory with a sophisticated, refreshed look and feel,” said, Matthias Kammerer, Managing Director at The Biltmore Hotel.

In December of 2018, The Biltmore completed the redesign and restoration of the hotel’s 271- luxurious guestrooms, corridors as well as its 1925 Donald Ross-designed golf course, which is one of only nine (9) Donald Ross designed courses in the top-100 golf courses in the U.S.  Led by architect Brian Silva, the project included new Bermuda grass, which was placed on the existing tees, fairways & greens. New bunkers were also incorporated to enhance the short-game practice as well as separate range areas, which establish challenging signature holes, extended the overall course length to more than 7,100 yards making it worthy of championship level play.

Now marking the final phase of the hotel’s New Era, is The Biltmore’s enhancements to its meeting and events space, which was designed to meet the demands of meeting and event planners as well as the modern-day traveler.

“We are proud to usher in the new era for The Biltmore,” said Gene Prescott, President and CEO of The Biltmore Hotel. “This historic landmark is a treasure of the City of Coral Gables, and the transformation allow us to highlight the hotel’s old-world feel while exceeding today’s modern-day standards of hospitality and golf offerings. We remain committed to the property’s success while maintaining its status as a first-rate, world class destination.”

The main theme that transpires throughout the hotel’s transformation is the hotel’s rich, storybook history. Inspired by George Merrick and his love for South Florida’s natural landscape, the newly revolutionized spaces incorporate the sage green from South Florida foliage, the rich greens of Coral Gables’ canopy roads, and the warm Mediterranean architectural inlays of the property’s original design. Additionally, the rooms and suites feature an elegant array of transcending tones including luscious plums, silver sage, and accents of regal gold that transports guests into a lavish and tranquil paradise. Designer touches include romantic gemstone chandeliers over the beds, classic moldings that complement the hotel’s character, couture fabrics such as cut velvets, embroidered damask, framed art created from original architectural blue-prints, and imported plush carpets.

For more information on The Biltmore Hotel, please visit www.BiltmoreHotel.com or call (800) 727-1926.

About The Biltmore Hotel

Recently renovated, graced with effortless beauty and sophistication, The Biltmore Hotel is a National Historic Landmark located in the exclusive Coral Gables area, with close proximity to Miami Beach and Downtown Miami. The 271-room resort includes 174 suites and features spectacular Mediterranean architecture with classic Italian, Moorish, and Spanish influences spread over 150 acres of tropical landscape. A favorite of world leaders and celebrities since its opening in 1926, the hotel offers a restored Donald Ross 18-hole, 71-par championship golf course; tennis courts; the largest hotel pool on the East Coast of the United States with private cabanas; a European spa and a renowned fitness center. The hotel’s dining destinations include the award winning Palme d’Or, one of the only AAA five Diamond restaurants in Florida; Fontana, a traditional Italian restaurant surrounding The Biltmore courtyard and fountain; the poolside Cascade and the 19th Hole golf centric restaurant. The hotel also boasts a Culinary Academy offering an array of hands-on cooking classes for adults and children. The Biltmore is one of South Florida’s preferred sites for leisure and business travel, high-level corporate briefings and public policy conferences, and is an extraordinary wedding destination. The Biltmore is a member of the Leading Hotels of the World. For more information or to make reservations, please visit www.BiltmoreHotel.com or call (800) 727-1926. 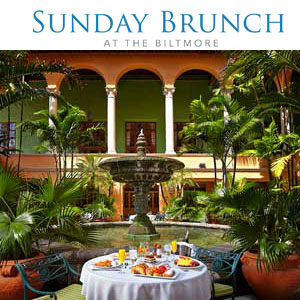